The opening party on Thursday night took place at the Norwegian Music Council.  It was a very informal gathering, with different musical moments: a wonderful men’s choir that used the sound of popping corks from prosecco bottles as percussion, and an adorable young female rock band, called “From Scratch”, with great potential!

The conference opened on Friday morning, illustrated by a wonderful guitar and violin duo (Sarah-Jane Summers + Juhani Silvola) that played Scottish, Norwegian and Finnish folk and jazz music, with a lot of improvisation.  The main hall of the conference was quite impressive.  It used to be a bank and is now a cultural think tank.

The opening remarks were made by Bård Vegar Solhjell, chair of Norwegian music council and Frida Blomgren, the deputy minister of culture.  I was impressed by the brevity and informal tone of these opening speeches, filled with entertaining anecdotes.

The Keynote speech was by Ferdinand Richard, on the subject  « Looking Back-Looking Forward:  The Future of Europe’s Musical Roots »; he talked about diversity and bringing down barriers.

I attended a panel discussion on “Freedom of expression”, chaired by Sara Whyatt, advisor of the Working Group Arts Rights Justice Europe and UNESCO expert on freedom of artistic expression. On the stage with her was Dr Srirak Plipat, executive director of Free Muse, an NGO dedicated to helping artists at risk, as well as a member of its sister organization in Norway, Safe Muse.  This was a very stirring, sometimes disturbing and inspiring discussion.  We learned more in detail about how artists are being silenced and persecuted around the world, and especially recently in the traditionally open West.  Statistics show that the great majority of artists who are being silenced are musicians, with the visual arts being second.  There are more women than men being attacked, and a growing number of LGBT artists also needing support.  Two thirds of the repression comes from governments (with Spain and the United States growing rapidly) ; the remainder is from civilian groups and individuals. Free Muse has noticed that there is definitely a “before and after Trump”: his election has legitimatized hate speech in Western Europe. 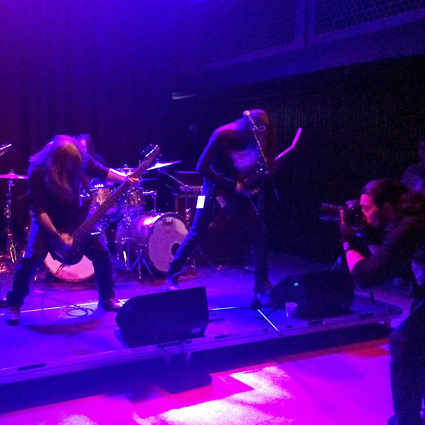 We heard from an Iranian black metal artist, “From the Vastland”, supported by Safe Muse.  Metal music is banned in Iran.  Sina Winter, the singer, has asylum status in Norway, and has petitioned for residency. It was a very interesting discussion and debate about where are the limits of freedom of expression.  There are international guidelines about hate speech that we can use, anything that incites to violence… in the case of the Spanish rappers that have been imprisoned on the basis of “terrorism”, they are just doing what rappers often do: provoke, invoke, bear witness to existing situations in a corrosive and exaggerated way. How is art being constricted in our own countries?  What we can do:

If you are approached by someone who needs help, put them in contact with Free Muse or Safe Muse.  Every case has to be studied individually. 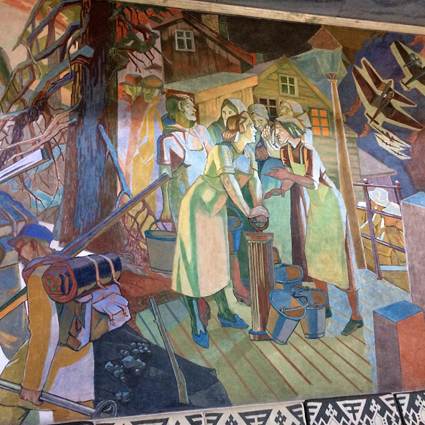 The next event was the reception at the City Hall, an impressive building that overlooks the harbour. I was struck by the hall where the ceremony for the Nobel Peace prize takes place, which is similar in size and scope to its sister hall in Stockholm.

After the reception and tour of the building, we moved on to a theatre where we had a joint session with the European Theatre Council. Barbara Gessler from the EU commission of Creative Europe joined us by Skype from Brussels.  The main points that came out were the planning for the next Creative Europe call, the budget, and the problems related to the upcoming European elections.  With many European countries leaning more to the right and less towards an all-inclusive Europe, it could be difficult to implement the decisions that are being made today for the future, notable in the precepts set out by the EMC in the Agenda.

In the morning, I attended one of the parallel sessions, a panel discussion on: Oral transmission as Intangible Cultural Heritage, with speakers from France, Hungary, Sweden (Sami), Poland and Estonia.  The Sami artist, Katarina Barruk, was particularly moving, we learned even more about the joik that we heard about in Stockholm last year.  She would be a good person to invite to one of EVTA’s events!Each of the other speakers talked about the oral traditions in their countries. 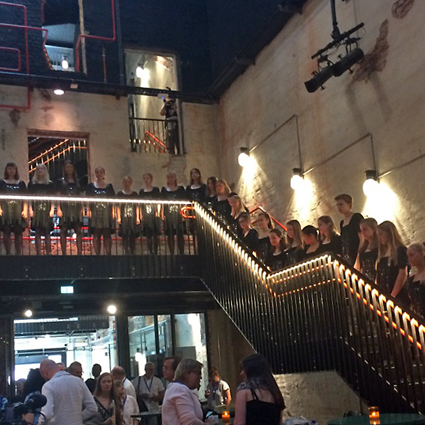 The morning continued with a concert by the Norwegian Girls Choir, beautifully put together in the winter garden with an Escher-like staircase. We then heard from the Norwegian Center for Traditional music and dance. I was surprised in the demonstration of how formal and decorous the demeanors of the dancers were! There followed a first at an EMC conference: in the room called “The Vault”, which is actually where the bank vault was, a concert by the black metal group From the Vastland, the band we heard about the day before.
Once everybody had recovered from that, we moved on to the Idea Hub. 6 people presented events and new activities. Especially of note: Sonja Greiner talked about the Europ Cantat festival in Tallinn, with a good power point presentation.

The other upcoming event that is good to keep in mind is the next World Forum on Music, run by IMC (International Music Council), and during which there will also be the EMC Forum. It will take place in Paris from September 27th to October 1st 2019, and it will also be celebrating IMC’s 70th birthday!  This year is also the 25th anniversary of Silja Fischer’s work as secretary general of IMC. After that was the Market Place. We split up into 3 groups to talk about different aspects of the European Agenda for Music.  One group was addressing issues related to the teaching of music in schools, another to the implementation of the Agenda, and the group I was in talked about EMC being asked to participate in consultations for a European Observatory of Music. I strongly encourage all EVTA members to become acquainted with the European Agenda for Music. I think I can safely say that this document, which EVTA contributed to and supports, encompasses the values all singing teachers share.  I think it should be translated into all of our member’s languages and disseminated as freely as possible !

Gretchen Amussen did a very good wrap up of the conference, and the evening was spent in a wonderful Peruvian restaurant with an amazing performance of a quartet also sponsored by Safe Muse, led by a well-known Afghan musician, Hamid Sakhizada, who is seeking asylum in Norway after having lived through persecution from the Taliban in his home country. I must say, all of the music that was performed throughout the Forum was of outstanding quality and very diverse.  The Norwegian Music Council and Safe Muse did an amazing job of programming all these wonderful artists!

On Sunday morning, I attended the EMC General Assembly as EVTA’s representative.  The business was gotten through quite expediently, and we moved on to vote in the new board.  The board is elected every 2 years.  It is notable that there were 16 candidates for the board, for 7 seats.  It shows that more and more members are interested in EMC’s activities, lobbying and advocacy.  There was an interesting twist to the election: 6 people had a majority of votes, and the 7th seat was a tie between 2 candidates.  We had to vote on whether to re-vote for these 2 people, or co-opt the one extra person, which makes an 8 member board.  This is the solution that was decided upon.  The new board is:

The new board represents a good panel geographically, as well as keeping good continuity and having new members. 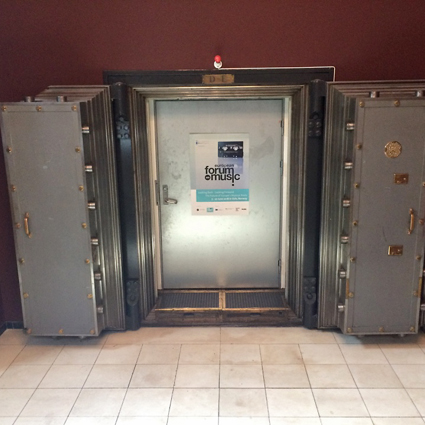