EVTA has been involved with three LEO projects, the first was a singing teacher exchange programme, the second was the digital resources for singing teaching project (these are kept in the archive at the bottom of this page) and recently we have been partners in this current project with the name Leo Sings. 8 partners from 5 European countries have joined together to share experience and mapping the diversity of individual and collective practices of singing throughout Europe, from childhood to adulthood. Discovering, experimenting, documenting diverse experiences including the study of multiple cultures and vocal training at all levels and with specific target groups (choral conductors, soloists / choir singers, singing teachers) in all styles, enrich national vocal practices and enable the partners to learn from each other and promote a network of innovative practices. In this way, organisations and voice professionals cooperated for the first time at European level on the complementarities between singing as a soloist and in ensembles, curriculums, repertoires, education, skills, the employability of the singer, the mobility of artists and projects, and more generally, the place of singing in society. The project also aimed to enable new forms of cooperation and strengthen the links between the partners, but also more broadly with all the people and structures involved in vocal practice.

We began in Barcelona in February 2014 looking at the training paths available for singers in Europe. We discussed all levels of singing from school children to professional singers, both solo and choral, in classical and contemporary genres. We heard some amazing singing from Spanish children's choirs and we also met some excellent presenters who stretched our vocal and imaginative ideas about singing. Here you can download the Report Leosings Barcelona Febr 14 (564 KB).

Then in May 2014 we were in Aalborg in North Denmark to learn about a very particular and unique distance- learning MA degree at the Music Academy in its wonderful new venue. The title of this session was 'Emerging Aesthetics: pop, jazz, rock'.  This proved to be inspirational, seeing the Danish teachers introduce the idea of the Intelligent Choir. We learnt about the digital resources they are using to work with students at great distances and this linked perfectly with our previous LEO project where we learnt about the ways to share teaching through Skype. They use an advanced but very effective programme called Adobe Connect. We heard some wonderful 'A Capella' singing groups and we were fully exercised with movement classes in rhythmic skills, circle songs, improvisation and conducting.

Here you can download the Report Leosings Aalborg May 14 (509 KB).

In October 2014 a large group of us went to Tours to discuss 'Collective practices'. This examined choral singing but also the connections with solo singing and EVTA contributed much to the sessions which were run in parallel with AFPC, our French members. We heard some amazing choirs, both professional and amateur. We explored the singing that takes place in cultural contexts, inner cities, with immigrants, hospitals, prisons, therapeutic situations. So it was a very broad overview of the kind of singing that takes place in Europe in all its diversity. The session also ended with a major choral festival at St.Lo.

Here you can download the Report Leosings Tours Oct 14 (196 KB).

March 2015 the final full session took place in Freiburg in the Black Forest. This was an opportunity to look at our co-operation within the European networks. We looked at marketing skills and how major music festivals are organised. But we also did a lot of singing, beat boxing and overtone singing. The networks we have made over all the LEO projects have been really dynamic and this project was no exception. As a result we are able to suggest new projects and we hope to take this form of European co-operation even further in the future.

Here you can download the Report Leosings Freiburg March 15 (204 KB).

Our final meeting in Copenhagen was an opportunity to write the final report, with prospects for further cooperation and recommendations to EU and local governments, quite a monumental task but an important one as the funding we receive helps us to finance a level of activity that would be impossible without the EU grants.

The reports that can be downloaded on this page, reflect the intense nature of our work and the notes that I took during the four working sessions. 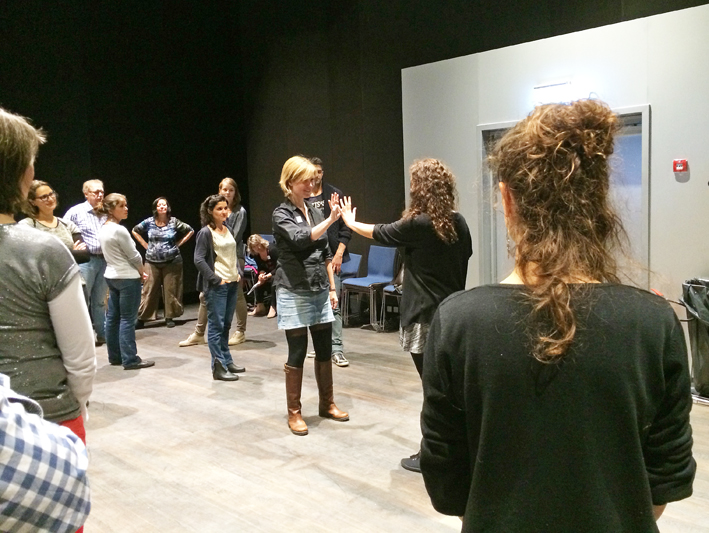