It was hot and humid in Copenhagen when I arrived to register at the new conference centre  (just completed in time!) at the Scandic Falconer Hotel in Frederiksburg, apparently the former venue of many famous concert performances by great jazz and popular singers e.g. Ella Fitzgerald. It was good to meet up with NATS President Karen Brunssen and Allan Henderson and share EVTA news with them.

In the evening I went to the centre of Copenhagen next to the Cathedral for the opening reception in the very grand University Library buildings, highly decorated with statues and wonderful paintings detailing the history of Denmark. We were welcomed with wine and speeches and music from musicians in the upper gallery before the walls on the side descended in theatrical fashion to reveal a beautiful Danish buffet with miniature and very tasty open sandwiches and towers of fruit and almond cake rings, all surrounded by beautiful ancient Flemish tapestries.

Such a splendid start and a chance to meet esteemed colleagues and I was fortunate to be invited to share a light supper with Filipa La, Johann Sundberg, Jan Svec, Sten Ternström, Brian Gill and friends, more networking of course!

The opening ceremony (8.30am) on Wednesday morning ‘exploded’ with a performance from the shouting choir “Tinnitus” from Aalborg and it was a ‘tour de force’ with force being the operative word but full of fun and energy and very entertaining. We were welcomed by the organising committee, Markus Hess and Johann Sundberg and then heard an interesting and unique performance by Mikkel Ploug, a young jazz guitarist and composer who gave us a revelatory composition using the voices and videos of Markus and Johann with inherent harmonic structure and prosody of their vocal timbre, added guitar improvisation and it was funny, clever, and educational! Look it up on YouTube!

Boris Kleber (now working in Denmark) gave the first keynote presentation “What goes on inside the brain of singers?” We had him in Eurovox Riga 2015 of course and he was equally brilliant again, so knowledgeable and clear and able to present brain imaging, clearly and with new insights. I liked his comment, “what you do below your nose, begins with above your nose” i.e. your brain messages! he emphasised the bi-hemispherical nature of brain activity and warned against the popular simplistic notions that singing is just on the right side of  the brain. It was good to hear all about the links between the auditory and somatosensory feedback and the evidence of the links between larynx and diaphragmatic activity in brain imaging. It’s what we know as singers but it is great that there is concrete evidence available from MRI scanning.

The workshops were held in lecture rooms with rows of seating that couldn't be easily moved. Some of the workshops were really extended Powerpoint lectures; they had asked for practical workshops but were not able to give us an open space.

Having said that every room was close by and reasonably sound proof and there were only 4 parallel sessions, thank goodness, all close to each other and the meeting/coffee/lunch space was close to the poster presentations and the publishers and apparatus manufacturers. So there was much more networking and cross-fertilisation to be had.

I heard about the diversity of Latin-American song, that’s at least 10 PhDs worth of knowledge. The Estill approach to teaching Jazz, and Sølvi Elise from our Norwegian association gave a great workshop on how Music Theatre and Jazz teachers can learn from each other.

After lunch Sundberg and colleagues including Filipa La, did several papers on ‘Flow phonation’ in singing, all excellent with a new piece of software called Fonadyn created by Sten Ternström which produced voice maps in fine detail, and the “discovery” that every voice is different!!! Hurrah! It was hard to maintain concentration but it was so interesting I managed not to fall asleep in a very warm and overcrowded room.

Then there were another lot of workshops which tried to be practical within the constraints of a lecture layout, one dealing with mental skills to overcome nerves and an interesting one on how different kinds of ‘grief’ can cause vocal problems in speech and singing.

I was rather frustrated that my practical workshop on exploring timbre ended up being a lecture format and I wasn’t able to use all the kinaesthetic, visual and sensory stimuli that I had brought with me but I think some of the participants understood what I was getting at and I got some nice feedback but I did say to the Pevoc hosts that if they want practical workshops we need to have a clear space. I should have gone outside as I really wanted participants to try out the different experiences. Another lesson learnt! But EVTA got another plug and they enjoyed a chance to actually sing and to think holistically about the voice which linked in nicely with Kristin Linklater’s key note the following day. 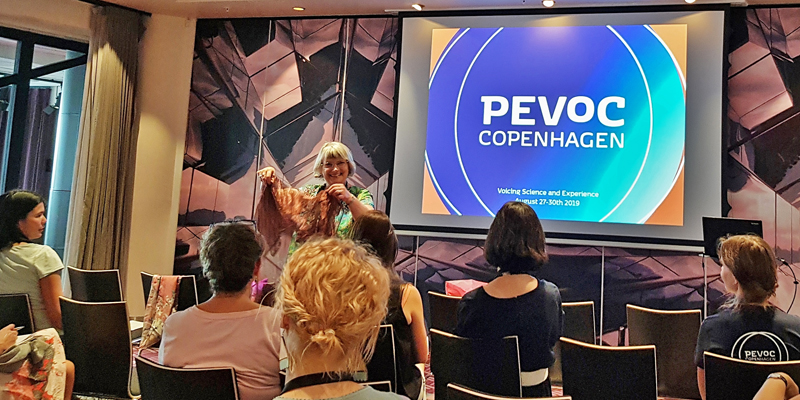 The following day we began at 7.45 am with Morning song (I was glad that I had had a quiet evening sorting myself out) and then more workshops starting at 8am!

I went to see the Realtime phonography RecVox with Svante Granquist and colleagues, fascinating stuff on Voice Range profiles, and really useful for helping transgender voices re-adjust tone and pitch. But it reminded me how much our ears do so much more than machines ever can.

Kristin Linklater was an amazing and wonderful ‘tour de force’, theatrical, funny and inspirational. She dodged using the microphone and introduced some new terms ‘oxycipotal-pharyngeal’ mouth and cranial floor!

The EVTA Voice Clinic session went really well, and we had Sarah Algoet and Lieve Jansen who spoke about the World Choir Games in Belgium next year. I gave a brief history of what we did in Taliinn and we gave out some paper and the questions that came up this time included:

•    Help please with menopause: I have lost my high notes- will I be better singing alto?

•    I’m a 16 year old male student and have a massive break when I sing. What can I do to work on this? How long will it take to solve this?

•    What do you do to deal with menopausal changes?

•    How do you deal with pushy parents and conductors overloading a young voice?

•    How do I increase my falsetto range?

I pointed out some of the examples of our Ten Tips which are on our website and someone found them straight away! But again we had 25 minutes only and I felt we could have gone on all day. Would it be possible to have an EVTA Voice Clinic at Pevoc? There were certainly plenty of singers and teachers wanting answers to questions and I encouraged them to work with their local choirs and music festivals and offer similar expertise in their own countries.

I saw Ineke’s book 'Singing from the Inside Out' on the Compton publisher’s desk and had a long chat with him. He is quite keen to revive or re-invent an e-magazine ‘European Journal of Voice’ which could contain book reviews and advertising for publishers. I said we had discussed doing book reviews some time ago but I could bring it up again. I understand he is coming to Eurovox in Edinburgh and he does publish some good books from our members.

The Advisory Board and I was able to contribute with EVTA’s perspective on Pevoc and the future and made good contacts with the Tallinn folk who are organising the next one (more details at our own Board meeting later).

Brian Gill gave an interesting masterclass with two singers, more on that later, I liked his ‘staying in the upper part of the egg’! 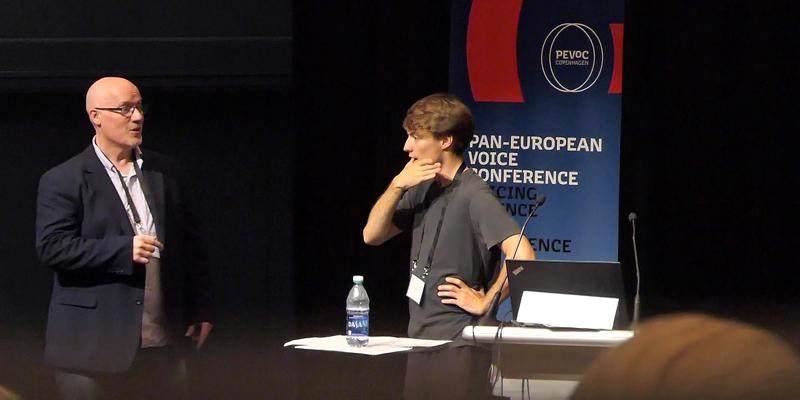 Our friend Ilter Denizoglu has a new face mask to add to the Lax Vox tube which allows the singer to articulate words and of course he was keen to promote the Turkish Association meeting in Antalya October 2020 where EVTA has been invited to contribute! Another Masterclass and Round Table perhaps or Voice Clinic??

Barbara Sambor from Poland looked at the Vocal tract in detail which was very good and Franziska and Angela Fischer from Austria did an interesting workshop on Eve-Marie Haupt “Integrative Voice Therapy and Voice Pedagogy” which involved a practical session using the power of our feet.

Friday morning was the slightly later start of 8.15 when we sang a wonderful Pevoc song written by Per-Âke Lindestad from Sweden, very funny and appropriate with verses for doctors, speech therapists, singers and teachers. A very clever man, more of him later.

I was able to wear the 3D glasses to see the 3D-videolaryngostroboscopy from Dirk Mürbe in Germany which was fascinating if slightly blood-curdling so early in the morning! I managed to catch the end of Kim Chandler’s workshop with useful harmonic warm-ups and exercises for jazz and actually all singers!

This was followed by a super but too brief talk by Kenneth Bozeman on Acoustics and Howell’s Absolute Spectral Tone Colour Theory, really good stuff which I want to follow up, he has another book now, he does explain difficult concepts so well for singers! Vowel migration and modification, how ear and brain process sound, under and over vowels….

Then we had another keynote by the great Per-Âke Lindestad, laryngologist and highly respected pedagogue who spoke about “Relative Truths and Myths about Voice”, definitely a wonderful erudite and entertaining speaker. It complemented all the other keynote speakers and he, like Sundberg, could make you laugh while questioning your misunderstandings! We do not have so many nerve cells in our larynx - I think 1-15 for each nerve cell, compared to 1-2000 in the rest of the nerve cells in our bodies! (I might have got that wrong but that was the gist of what he was saying). The velum and the larynx are branchial modalities while the external muscles of the neck are somatic. In other words, are you sure you can feel your vocal folds??

Rebecca Moseley-Morgan from UK (interested in joining EVTA) did a good but basic workshop based on her PhD work looking at the vocal function of female older singers. Then Melissa Forbes from Australia, Irene Bartlett (AU) and Jeannette Lovetri (US) did a very basic demonstration of CCM vocal pedagogy, good but nothing really new I felt.

Malene Bichel (DK) did a refreshing take on singing and culture but I had to leave early to prepare for the masterclass. 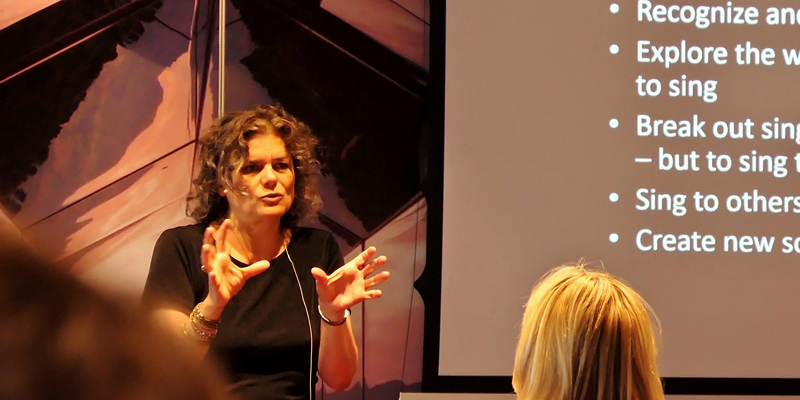 We had a brief lunch meeting just to check that all on the the Round table panel knew the time constraints and it was wise of Lieve to do this as time was very limited. My feeling was that it went very well, we could have had more discussion on the teaching that the 3 of us did in 15 minutes with the 3 singers but the panel appreciated being together and looking at the question of different genres and teaching from a wide perspective. David Howard was fantastic as always, talking about intonation and pitch in his own inimitable, erudite way, entertaining us while teaching us so much. And then we came to the final closing ceremony where we heard a lovely boys choir Sankt Annae Junior Male Choir who sang with such feeling and musicality, there was much thanks to all involved and a short video from Tallinn and the Estonians about the next Pevoc 2021, 19-22nd August. I know it is the same month as ICVT but I do think it is valuable to maintain the strong links we have established with the voice scientists and other voice professionals with whom we can share so much.