The 10 YPP singers all performed at the Eurovox Final Concert on September 1st, 2018 at the Royal Conservatory in the Hague.

Sophie Allen is a British mezzo-soprano who is enrolled in the Master’s program at the Mozarteum University in Salzburg, Austria. She has performed as a solo and ensemble singer in various productions and venues throughout Europe and as far away as Indonesia.

Solveig Bergersen is a Norwegian soprano in the bachelor program of the Norwegian Academy of Music. Although she specializes in classical music, she also performs music theatre repertoire.

Anne Bertin-Hugault is a French mezzo-soprano living in Aix-en-Provence. Anne is an accomplished pianist as well as a singer. She has performed as a soloist and an ensemble singer over a wide range of styles, from early music to free improvisation.

Tiina Björk is a Finnish pop singer who is completing her Master’s degree in music education in Helsinki. She is a singer-songwriter who performs her own materiel as well as music in different genres, as a soloist and in ensembles.

Filomena Croce is an Italian jazz singer who is currently in the Pop and Jazz Master program at ArtEZ Conservatory in The Netherlands. She has performed extensively throughout Europe, as a solo singer and in ensembles.

Viktoria Nikolova is a Bulgarian soprano who just finished her Master’s degree at the Conservatory in The Hague. She performs in Bulgaria and The Netherlands, and sings traditional folk music as well as classical.

Elisabeth Pawelke studied music pedagogy and musicology in Munich and Basel, obtaining her Master of Arts degree in 2013, as well as a Master of Music in 2014. She also earned a Bachelor in voice speech therapy at the University of Munich in 2017. Elisabeth currently works as a voice teacher in a music school and as a voice therapist at the Research Centre for Voice and Speech at the University of Munich.

Mariana Pedrozo is an Argentinian mezzo-soprano who is studying for her Master’s in vocal pedagogy in Salzburg, Austria, as well as working on obtaining a Master’s degree in Classical Voice Performance in Linz. She has performed a wide range of repertoire in Argentina and Europe.

Clarissa Reali is an Italian soprano currently enrolled in the bachelor program at the Scuola di Musica in Fiesole. Next year she will continue her studies to obtain her Master’s at the Conservatory in Neuchatel, Switzerland. Clarissa sings a wide range of repertoire, from late eighteenth to twentieth centuries.

Elena Toullec is a French pop singer who is studying at the Conservatory in Rennes, France. Her main project as a singer is her band, Porko Rosso, (funk/groove); she also teaches voice and sings in various venues in and around Brittany.

Liset Vrugteveen is a soprano singer from the Netherlands. She successfully graduated at the Haarlem conservatory music theatre in 2014. Liset played in multiple Dutch musical productions and performs as ‘Mammaloe’ in musical and tv-story ‘Pipo de Clown’. (a famous Dutch children’s story) 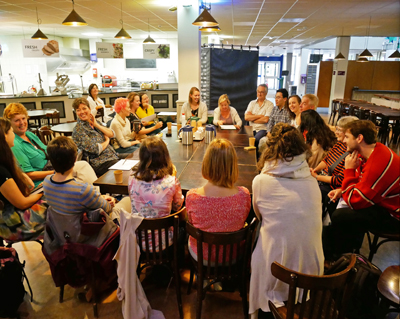